Hey Google, Why Do You Have Four Different Task Apps?

by Bagus Makarim
in Teknologi Digital

Gmail’s new interface feels shiny and new on the surface, but something about it just stinks. Gmail’s new Tasks app is separate from Reminders, which are used by Calendar, Inbox, and Assistant. And Google has two other task apps—including one used only for your shopping list.

Reminders Were Going So Well

The Gmail team’s decision to create a new Tasks app is so disappointing because Google was successfully tying everything together with Reminders. Reminders are used by Google Calendar, Inbox, Assistant, and Keep. And you see the same reminders in all of these apps.

It’s all so convenient and integrated. Every app doesn’t have its own separate task list. The same list of reminders follows you around from app to app.

Google’s new Tasks app is available in two locations—via a Tasks pane in Gmail, and via a new Tasks app for Android and iPhone. It’s a pretty minimal interface and doesn’t have many of the features you’ll find in Reminders, such as the ability to create recurring events.

While Reminders are part of Google Calendar, and the new Gmail interface does have a Calendar sidebar, it only shows calendar events and not reminders. And, while you can assign a task to a specific due date, that task won’t appear on your Google Calendar or in any other apps that support Reminders. It’s a mess.

It’s not even consistent among Google’s email apps. Google’s Inbox app uses Reminders and Google’s Gmail app uses Tasks. You’ll see the same emails in each interface, but Inbox and Gmail have their own task lists that don’t communicate.

I’m struggling to understand why the Gmail team created Tasks. According to the Wall Street Journal’s David Pierce, Google will one day combine Tasks and Reminders. Jacob Bank, the product manager of Gmail at Google, said this update was a “statement of intent” that Google won’t forget about Tasks again. They’ve forgotten about Reminders instead.

Even when Google didn’t pay much attention to Tasks, the same Tasks list was available in both Gmail and Calendar. Now that Google is “serious” about tasks again, they’re even harder to use.

Google Keep Offers Task Lists (and Is Integrated Into Gmail, Too!) 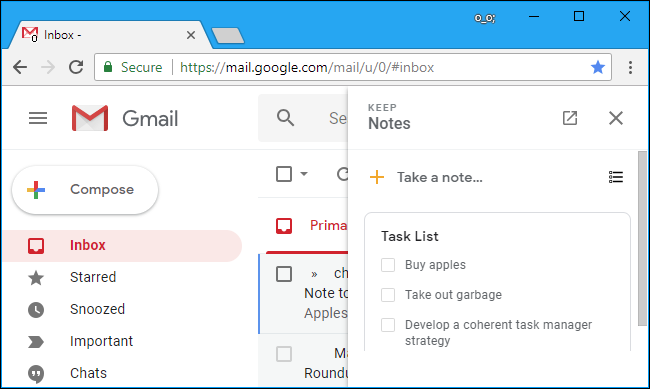 Google didn’t even need a new task list app! If Reminders aren’t working for you, Google Keep can easily create simple task lists complete with checkboxes. In fact, Google Keep is integrated into the new Gmail redesign, so you can use the Google Keep sidebar to create and maintain task lists. There it is, right in the new Gmail design, without needing the new Tasks interface.

Google Keep is also integrated with Reminders, so you can add a “Reminder” to a note in Google Keep and make it appear on your Google Calendar, in Inbox, and elsewhere Reminders are shown. Or, if you just want to create a simple tasks list with no dates assigned to it—in other words, how the new Tasks app works—you can just use Google Keep without assigning a reminder. It’s really simple.

Shopping Lists Are on a Different Website For Some Reason 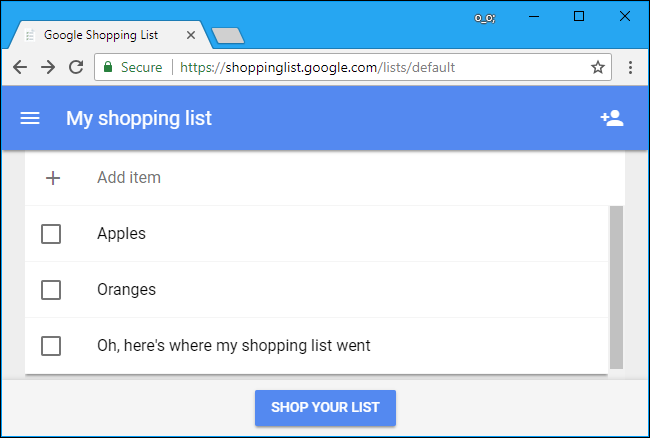 Now, saying “add (item) to my shopping list” to Google Assistant adds that to a special shopping list stored at shoppinglist.google.com on the web. We hope you don’t want to see your shopping list in Gmail either, because that’s not one of the available sidebars in the new interface!

Why does everything have to be so complicated? Why does Google need 82 different chat apps and this many different places to store tasks, reminders, to-do lists, and shopping lists?

Apple has a single app—named Reminders—that contains reminders, tasks, and shopping lists. There’s a Notes app if you want to write a more detailed list. That’s it!

Google was almost there. Reminders are already used in Google Inbox. They just had to add Reminders to Gmail and create a dedicated Reminders app to make it easy to use. That’s it.

Please stop making everything so complicated, Google. I just want one list of tasks, and I want to see that list in all your apps.

How to View a Slideshow on Windows 10

How to Remove Smart Tags from a Workbook in Excel

How to Stream UFC 241 Cormier vs. Miocic Live Online

How to Report Phishing and Malicious Websites in Google Chrome

What Are Esports, and Why Do People Watch Them?

How to See Which Windows Version and Build is on a DVD, ISO, or USB Drive

How to Find and Delete Google Assistant’s Stored Voice Data

How to See Which Windows Version and Build is on a DVD, ISO, or USB Drive

No Result
View All Result